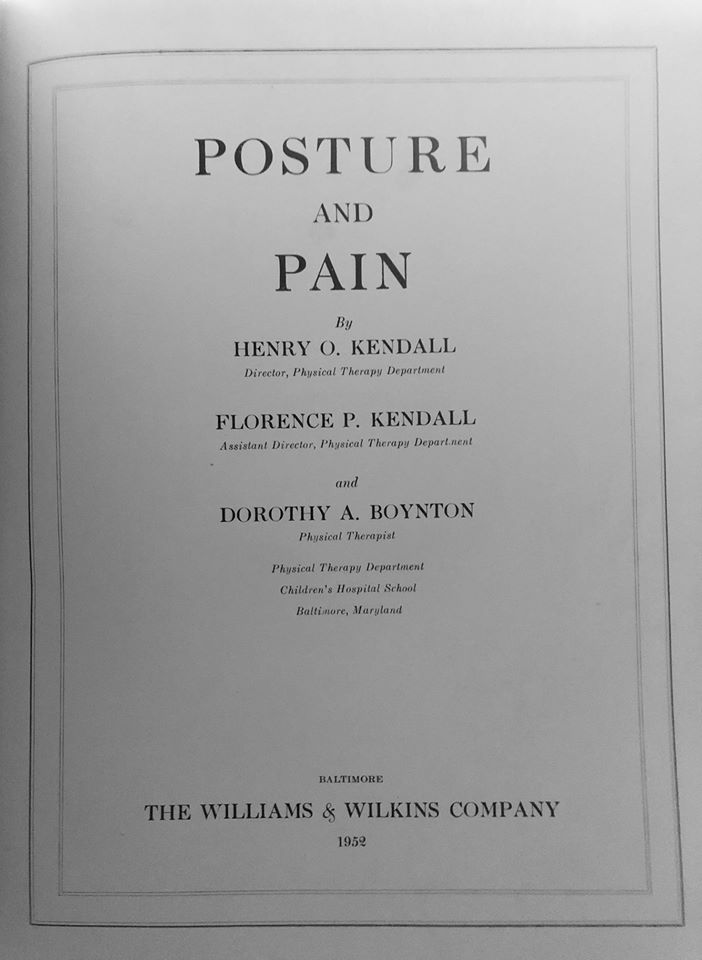 On posture and 70 years of nonsense – by Rhys Manchester:

“The physical therapy department at the Children’s Hospital School in Baltimore has had over 10,000 admissions between 1932 and 1950.Most of these cases represent some form of orthopedic disability, the majority having been about equally divided between poliomyelitis and faulty or painful postural conditions. Patients with paralytic poliomyelitis often present the extreme and potential or actual faults of alignment and muscle balance. Thus, most of the 10,000 patients have had some associated problem of faulty body mechanics. In addition there been approximately 2000 posture examinations of so-called normals in ages ranging from five to twenty-five. with few exceptions, these individuals have been examined by the senior author of this book.

The detailed records of the aforementioned 12,000 cases are on file in the department and, although no tabulation of data is included in this volume, the observations, conclusions, and recommendations presented are based on the experience gained from this large number of cases” (Kendall, Kendall, & Boynton, 1952).

Kendall, Kendall, and Boynton (1952) collected the postural data on 10,000 patients afflicted with polio, many of whom they treated over an 18 year span. They also performed 2,000 posture examinations of people who were considered healthy individuals (“normals”). These participants were students at West Point Military Academy, Loch Raven Elementary School, and the Johns Hopkins School of Nursing. Please note that the authors did indeed collect data from postural examinations of 2,000 people considered normal and healthy. But they did not use these data. This is where it gets interesting.

“An evaluation of postural faults necessitates a standard by which individual postures can be judged. The alignment used as standard must be consistent with sound scientific principles. It should be the kind of posture which involves a minimal amount of stress and strain and which is conducive to maximal efficiency in the use of the body. The standard must meet these requirements if the whole system of posture training that is built around it is to be sound” (Kendall, Kendall, & Boynton, 1952)

Interestingly, a standard can have several meanings: “Something used as a measure, norm, or model in comparative evaluations” (OED, 2016). And people say, “it’s just semantics,” as if semantics don’t matter. So, a standard can mean the norm or it might mean the model to emulate. Another word for a norm is an average. A model, however, might be many things, including an ideal. Now…

“The standard posture as used and described in this text refers to an ‘ideal’ posture rather than an average posture. In this chapter the authors illustrate and describe it in specific terms. Its relationship to significant anatomical, physiological, and mechanical factors is discussed in detail. It is important that the reader visualize this standard as a basis for comparison, since good alignment or postural faults will be described in terms of this standard” (Kendall, Kendall, & Boynton, 1952).

Wait a second! These authors examined 2,000, “so-called normals,” and instead of developing a range of what might be considered the average posture to use as a standard for comparative purposes, in order to identify postural faults, they used an ideal based on an informed guess of what was perceived as being maximally efficient (Kendall, Kendall, & Boynton, 1952)?!?!?! But this gets better…

“The standard is one of skeletal alignment because posture is basically a matter of alignment. The body contour in the illustrations of the standard posture is included because it shows the relationship of skeletal structures to surface outline when alignment is excellent. It is recognized that there are variations in body type and size among individuals, and that shape and proportions of the body are factors in weight distribution. Nevertheless, the authors believe that a standard of skeletal alignment can be considered a valid standard for evaluating the posture of any individual regardless of body type or size” (Kendall, Kendall, & Boynton, 1952).

So the ideal based off of what the authors considered, “the kind of posture which involves a minimal amount of stress and strain and which is conducive to maximal efficiency in the use of the body,” is considered valid and not the actual average that you measured from 2,000 healthy people? They measured 2,000 healthy people from which to develop a standard based on a range of average and they did not use it? This gets better…

“The importance of body contour lies chiefly in the fact that variations in contour are correlated to some degree with variations in skeletal alignment. Fortunately this is essentially true of everyone regardless of body build. Thus an experience observer is able, by observing the contours of the body, to estimate the position of the skeletal structures.

The standing position may be regarded as the composite alignment of a subject from four views, front, back, right side, and left side. It involves the position and alignment of so many joints and parts of the body that it is not probable that any individual can meet the standard in every respect. As a matter of fact, the authors have not seen an individual who matches the standard in all respects.” (Kendall, Kendall, & Boynton, 1952).

Did you get that? Because the standard is based on the ideal and not the average, “it is not probable that any individual can meet the standard in every respect. As a matter of fact, the authors have not seen an individual who matches the standard in all respects” (Kendall, Kendall, & Boynton, 1952).

This is the foundation of many if not most postural assessments out there. For 70 years people have been compared to a standard for which it is not likely that any one person will ever match and even after examining 2,000 healthy people, the standard was never observed. Wow, just wow!

Schedule an Evaluation or Learn More

Warm Up
Scroll to top